Libby wanted something reminiscent of her star sapphire ring, but her first try, Argent, on a cartouche azure a compass star elongated to base argent, conflicts with a 1996 registration, and the similar version with a purple cartouche also conflicts with something. 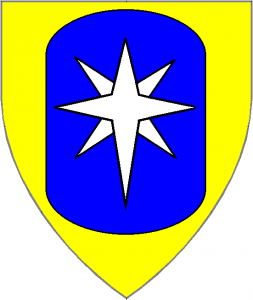 But before I could even suggest it, she came up with this one: Or, on a cartouche azure a compass star elongated to base argent, and as far as I can tell it’s clear! So chalk up another one for the Lightwood heraldic push!

Sadly, before she got it registered, Libby had a change in circumstances that made involvement in the SCA too difficult, and she never did get around to registering this or choosing a name.