To find out the latest news from the Canton, go here.

So What Is The Canton of Lightwood?

The Canton of Lightwood is a sub-group of the barony of Ynys Fawr, which is the branch of the Society for Creative Anachronism that covers Tasmania. Lightwood started in Geeveston, but it has members all over the Huon Valley. 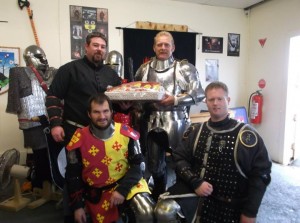 For a few years, Geeveston enjoyed its own bit of historical re-enactment, the Medieval Mayhem day. People had loads of fun, and SCA members from Hobart came down to participate. Everyone agreed that there was a lot of potential in Geeveston and the Valley for this sort of thing to happen more often. All we needed was someone local to keep it all going…

In early 2009, Eric and Liz from Canberra moved to the Huon Valley.  Part of their reasons for choosing this part of the world was that any place that has an event like the Medieval Mayhem would have to be their kind of home.  They set about starting a new branch of the SCA in the Valley, choosing the name Lightwood from an old name of the Geeveston area, Lightwood Bottom.  They attracted new members and a few old ones.  They built up the group to the point where it’s now one of the most active parts of the Tasmanian barony, and it’s welcoming new people all the time.

The SCA is all about recreation (fun) and re-creation (history). Any activity that people enjoyed in our period, which ranges from 600 to 1600AD, is generally part of the modern SCA. Here’s a partial list:

The short answer is: anyone can play.

Groups around the world vary in how much attention they pay to parents with kids – some always make sure their events are kid-friendly, others just do the basics to insure the kids don’t feel completely left out – but our group began with a household that has more kids than adults so you can be sure where we stand on that line. If you have kids, you’re very welcome, and w

e will try to make sure your kids have at least as much fun as you do.

Similarly, we know that being a teenager in the country can be a bit dull, but we know of many many teenagers who have found the SCA to be a considerably friendlier environment than anything they’ll find in the mundane world. We want Lightwood to be like that, so as to make sure our group stays vibrant after we’re all old and grey.

Meanwhile, if you don’t have kids, the SCA is big enough to keep you entertained. The SCA caters to the sporty types, with archery, fencing and sword fighting, and to the arty types with all sorts of arts and sciences from Acting to Zymurgy. If you like to get involved in running things, we’re always looking for more officers. And if you just want to relax and watch the world go by, the SCA tends to attract people who don’t mind a bit of a chat over the feasting table or by the listfield side, so you’ll fit right in.