Every SCA group has to have a name properly registered with the College of Arms before it can be considered official, and while a device (“coat of arms”) is not a requirement for any group smaller than a barony, there are advantages to getting that sort of thing right early on. Fortunately, the new canton has access to a number of experienced SCA heralds, so none of this was remotely difficult, and we got our name and device passed and registered in record time.

Lightwood was an obvious choice of name for a group that started in Geeveston. Geeveston is named after William Geeves, an English settler who was given a grant of land in the area in the 19th century, but the region was known before that as Lightwood Bottom. The Huon Pine, the Huon Valley’s most famous species of tree, is a light coloured wood, so the name suits the whole valley into which the canton will one day expand.

As for its historical origins, the rules say we can have a name that either was or could have been in use in our period in Europe and Britain, provided it’s not too famous (like London or Paris). Lord Domhnall na Moicheirghe, Rocket Herald, found evidence to indicate the likely existence of a place variously called Lyghtwood, Lyghtwoode, Lightewoode or Lightwood, in the mid- and late-16th century. That was helpful for documenting the name with the College.

Once the canton was up and running, with members and activities and evident signs of life, we gathered a petition and submitted our name for registration in February 2012. The process used to take six months to a year, but for us it was all done and formally announced by July and now we can use the name in perpetuity. 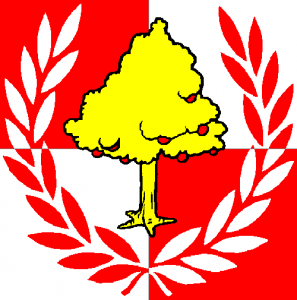 The device was designed by Mistress Madelaine de Bourgogne in consultation with the citizenry of the canton. The blazon reads Quarterly gules and argent, an apple tree Or fructed gules within a laurel wreath counterchanged. Our checks of the worldwide Ordinary and Armorial of the SCA College of Arms showed this to be free of conflict, which means we could submit it for registration… and the College of Arms agreed, because it was registered without the slightest difficulty less than four months after we put it in!

The device is unusually simple, considering that the database of already-registered devices in the nineteen kingdoms of the Known World now exceeds eleven megabytes of text and has nearly ninety five thousand lines, each one representing a separate name or device. We managed to keep it simple, and in good heraldic style, because very few registrants hit upon the idea of using both white and yellow, the heraldic “metals”, in the one design. Mostly they pick two or more of the “colours”, red, black, blue, green or purple, and only one metal. That simple design decision cleared out a lot of other devices that might potentially have conflicted.

The elements each have their purpose. The apple tree represents both the outsider’s image of Tasmania as a whole, and the insider’s view of the Huon Valley, a place of trees, apple and otherwise. The Huon Pine is a rich, light golden wood, so yellow was a far better choice than the obvious green. The laurel wreath is a required element of all branch arms, and we toyed with different ways to place it before Mistress Madelaine hit upon the idea of letting it become more of a background than a foreground element, thus emphasising the much more important tree.

As with the name, registration requires the approval of the canton’s members and usually takes several months, but we got it all through with impressive speed.  We’re all set to paint the red, white and yellow on all our goods and chattels to indicate our allegiance.