In February, the Canton put on a show with the Holy City War and Feast. Originally conceived of as a change from the more generic “medieval” events which Lightwood has held in the past, the Holy City was envisaged as a representation of 1000 years of Jerusalem’s history, from 600­-1600. The event was originally planned for later in February, but when the King and Queen of Lochac requested that an event be run for Their visit on the weekend of 7­-8 February, Lightwood put in a bid and the Canton was chosen to host the Royal visit to Ynys Fawr on behalf of the Barony.

During the day, we had a number of marquees set up on the oval for shade for eating, sitting, children’s entertainment, and market stalls – luckily, since the day turned out to be the equal-hottest day of summer. The Barony had taken to heart the invitation to array the site in personal heraldry, with pennants and banners making a fine sight. 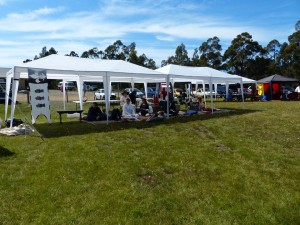 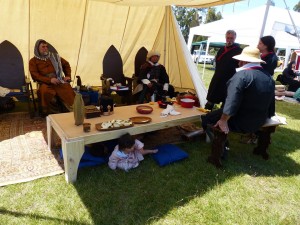 The main focus of the day was the war, between the marauding Mongol horde of the King, and the Baronial forces. Despite the valiant efforts of the defenders, fighting in the name of the last King and Queen of Lochac, Niall and Liadan, Ynys Fawr was conquered and yielded to the rule of Kinggayadai Khagan and Altani Khaligu Yeke Khatun. 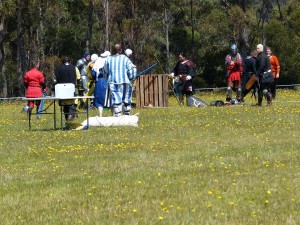 After we packed up the tents on the oval, it was time for Court and the feast. During Court, many awards were handed out to deserving members of the populace by both the King and Queen and the Baron and Baroness.

In the Royal Court, David de Derlington was elevated to the Order of the Silver Pegasus; Jennifer le Dragoner de Lille and William de Bonnay were both awarded the Order of the Nock; Ayla of Rona, Einarr inn kyrri Úlfsson, Guðleifr Ørrabein, Juliana de la Rose, and Ursula Mariae Einhorn received Awards of Arms; and Bridget Wynter and Gocken de Leeu were made members of the Mouse Guard.

In Baronial Court, the de Derlington Household were given the award of the Billowing Sail; William and Morwenna de Bonnay, Drusticc inigena Eddarrnonn, Karl Faustus von Aachen and Adelindis filia Gotefridi received the Garnet Anchor; Robert de Bonnay, Aidan Brock and Perran of Lyskyret the Bronze Falchion; and Thyri skjaldmær the Azure Pennon. After Court, Thyri and Einar were handfasted in Viking style by Baron Hrolf. Then the feasting began!

The Barony’s premier feast cook, Sir Guillaume d’Oze, laid on a splendid spread, a five course feast based on different periods of rulership over Jerusalem 600-1600.The courses were as follows:

He also prepared some inventive surprises, like the Golden Gate of Jerusalem made in gingerbread and filled with marzipan roses. For entertainment, there were two wonderful bellydancers in Ottoman costume who danced two sets during the feast, as well as others who sang or told stories. 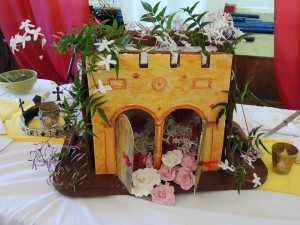 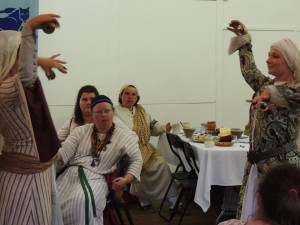 All in all, it was a long, hot, exhausting, but fun­-filled and successful day!

Steward was Adelindis filia Gotefridi, and Head Cook was Sir Guillaume d’Oze (below left). Lunch cook was Thyri skjaldmaer; Marshal was Robert de Bonnay; Constable was Helewyse de Bonnay; and Herald, Karl Faustus von Aachen. And, of course, Housse de Bonnay, the Canton (not all included in the photo below), and the rest of the Barony pitched in with an immense amount of help and assistance, both on the day and in the lead-up to the event. 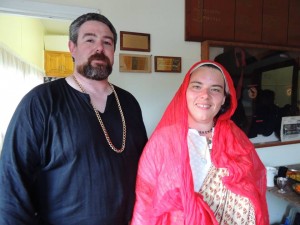 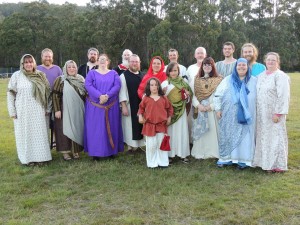