The Canton held its midwinter event, based on the Roman Festival of Saturnalia and stewarded by THL Karl Faustus von Aachen, at Kraken Hall on June 24th. We were pleased to have the company of Baron Gilbert Purchase and Baroness Bethony Gaitskell of Krae Glas and their family for the occasion.

The Gladiatorial Games during the day were greatly entertaining (if chilly). The populace were able to buy a gladiator for the games at the initial auction, held after opening Court, and the first round of the tourney was conducted by owner’s challenge. There was much amusement provided by the audience’s ability to determine whether the victorious fighter should deal a final blow to their defeated opponent to end their suffering, or permit them to continue fighting. After the audience participation round, the tournament was decided by a round robin format, with the victor being Sir Gilbert Purchase, Baron of Krae Glas.

After the fighters had retired from the field, the next generation of Ynys Fawr’s combatants took their places for a boffer tourney, followed by a splendid melee in which a fierce lion (Lord Robert de Bonnay) was vanquished by the sheer number of his opponents – and an unexpected Knight. 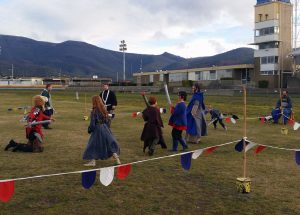 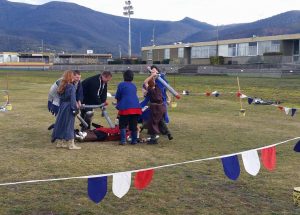 The valiant children were later called up in Court and presented Baroness Adelindis filia Gotefridi with a lion skin as a memento of their brave battle. Huzzah! Also at Court, Floki Snorrason received an encouragement token, and Lord Drustin of Skye was made a member of the Order of the Golden Beacon for his excellence as an example of presentation and conduct in persona.

The evening’s feast, catered by Lady Alessandra di Fiore di Piero della Mora in her first (but hopefully not last!) feast in her new Barony of Ynys Fawr, featured a hearty winter’s menu based on the recipes of Apicius. Despite not being a member of the Canton, she certainly lived up to Lightwood’s motto Walk In, Waddle Home. She has kindly provided her redaction for one of her dishes below.

There was also much entertainment and gift giving in the spirit of Saturnalia. The A&S competition for the evening had two categories: a small item suitable to be given as a gift, and a poetic work to be presented to a person of higher rank. These received one entry each, with a beautiful set of wooden feasting gear presented by Lord William de Bonnay to Floki Snorrason, and an impressive poem composed in dactylic hexameter by Master Hrolf Herjolffson, and presented to Baroness Adelindis. While the categories were unable to be judged, both entrants received a token for the quality of their entries. The poetic theme was continued by several, and there were also a number of songs performed throughout the evening.

A rousing good time was had by all who attended on the day, despite the chill. Io Saturnalia!

Ham simply cooked in water with figs is usually dressed on a platter (baking pan) sprinkled with crumbs and reduced wine, or, still better, with spiced wine and is glazed under the open flame, or with a shovel containing red-hot embers.

1 Perna is usually applied to shoulder of pork, fresh, also cured. Coxa is the hind leg, or haunch of pork, or fresh ham. Cf. note 1 to ℞ No.289.

The redaction used for Saturnalia was:

Place the pork in a roasting dish, add the wine, figs, sultanas, pepper, salt and bay leaves (sage if using). Place into a preheated oven (160 if fan forced 180 if not). Roast for several hours.  Every hour or so roll the pork over and baste with wine and cooking juices. You can then take the skin off and place it under the grill and make crispy.